Opa Cupa! (read: "Opa chupa"), it's a shout of exhortation to the dance used by gypsies of South-Eastern Europe. Musicians coming from different cultures (Bosnia-Erzegovina, Albany South Italy) gather around the leader, the trumpeteer Cesare DellAnna.

This 12 piece band play a "marginal" music, blending the kaleidoscopic sounds and fascinating melodies of ancients Balkan songs with the traditional music of southern Italy.

GRAMPALL JOOKABOX
Enter the private, brightly infantile, electrically sanctified world of Grampall Jookabox's idiot-savant folk-rock. The spectrum of influences and appropriations feeding into this album are impressively, almost schizophrenically varied. There are hints of early blues, notes of civil war ballads, and children's sidewalk-chalk rhymes, all filtered through spastically epic and innovative intuition, creating a final product not unlike the early work of Daniel Johnston. - Joyful Noise

“Anyone called a "ghetto-folkster" is alright by us, but this is real Marmite stuff - it's either genius or moronic, but is probably blessed with a touch of both. There's definitely something arresting about the soulful warbling of "Now don't it make you feel good when a girl ain't preggers?" over the kind of music Kings Of Leon would have made if they'd been brought up on a pirate radio instead of rock'n'roll.” - The Lipster
Posted by The Fold at 12:06 PM 1 comment: 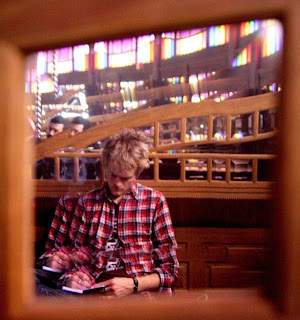 ADAM STEPHENS
“Adam Stephens is best known as guitarist and vocalist for San Francisco duo Two Gallants. Stylistically rooted in the blues and folk influences of decades past, Stephens offers an independent voice seemingly unaffected by the confines propagated by musical contemporaries. For those accustomed to the rhythmically backed context in which Stephens typically performs, expect a performance more akin to Two Gallants' 2007 acoustic release "The Scenery of Farewell", complete with Stephens' intricate fingerpicking and lyrics befitting a classic novelist.” Anne Ostrowski

FRANK FAIRFIELD
“’He's like 26 years old and he sounds like Mississippi John Hurt," says Robin Pecknold (Fleet Foxes). Fairfield plays fiddle and banjo player and strums back-porch bluegrass, complete with shaky jug-band vocals reminiscent of The Foggy Mountain Boys from way back in the '40s (think O Brother, Where Art Thou?). "He's kinda crazy. He has his own radio show where he just plays these old gramophones. He just puts a mic up and plays all these field recordings from the 1900s; it's insane. He dresses like it's the early 1900s. He's born out of time, and his voice is amazing.’” - Rolling Stone

ADVANCE TIX HERE!
http://www.inticketing.com/evinfo.php?eventid=29336
Posted by The Fold at 5:54 PM No comments:

Sausage, Sauerkraut, Collared greens and Rock and Roll in the afternoon...
Posted by The Fold at 5:26 PM No comments: