Doods dig Girls, girls dig Girls - the scraggly SF white boy (not girl) band. This is a show you do not want to miss. Girls will journey down to the Southland and play a long awaited Los Angeles show on February 26th at the Silverlake Lounge with Wounded Lion.

Christopher Owens and Chet JR White perform pop songs that contain aggressive dramatic guitar playing with bright catchy hooks. Think Jesus & Mary Chain, MBV, and Glasvegas. Last year, their limited edition 7” entitled “Lust for Life,” sold out in just a week. The song is not a tribute to or an Iggy Pop cover, but a fun happy song that will have you singing along and dancing to after a few listens. The band has received rave reviews and accolades from SF Bay Area press (as well as our pals at Pitchfork Media and Gorilla vs Bear) and are currently working on new material for their forthcoming debut full-length.

Check out their video for “Lust For Life” here: 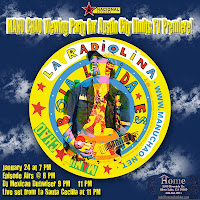 “The Spanish-French singer’s U.S. performances are rare, and his American television appearances even rarer. Everyone in the room for the intimate taping seemed to recognize it was a special evening and the entire audience was on its feet well before Manu Chao took the stage. And we remained standing, dancing for the bulk of the show. The performance was an exhilarating journey as the defiantly political artist sang with raw heart that transcended any language barrier. It was also an exercise in audio whiplash as the pace of the show vacillated between easy skank and breakneck, moshable ska.” - Austin360.com
Posted by The Fold at 5:55 PM No comments: