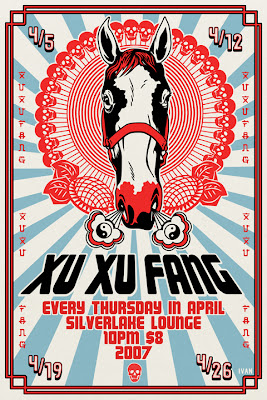 Layered, dreamy, complex music absolutely worth checking out. I'm giddy about this one, but please don't ask why they always have horses in their promo shots. I don't get it either, but that's okay.
Posted by The Fold at 1:30 PM 2 comments: 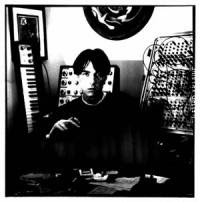 I missed his last show, but fate and Safari Sam have apparently given me a second chance to catch Pete Kember (who dubbs himself Sonic Boom), a former member of the legendary psyche-rock outfit Spacemen 3, and Experimental Audio Research (aka E.A.R.)

Next month, Kember will be playing a song set at Safari Sam's, and I was just told that "instead of doing the experimental electronic bits, he's going to do song-based stuff, most likely old and new Spectrum, Spacemen 3, and other stuff." So says Andy, vocalist for the ethereal San Franscico psychedelic shoegazers LSD And The Search For God, who open the show along with the swelling pop-electronica of L.A.'s own Eskimohunter. 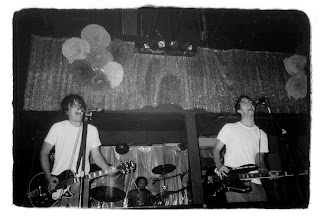 You may recognize the above photo as Lifter, and its bassist as one Mr. Jeffrey Sebelia, fashion maven and victor of Project Runway. It's from the Fold's first show on April 17, 1997, nearly a full decade ago, and we've just asked Scott Sterling to approximate how many shows he's orchestrated since then. At this moment in time, he's mumbling an incoherent stream of numbers like Rainman.

So the point is: it's been a busy ten years at the Fold. And it's time to let loose with a little anniversary show Tuesday, April 17th at the Silverlake Lounge...
Posted by The Fold at 3:41 PM 1 comment: