JAVELIN
“Javelin, comprised of New York City crate-rats George Langford and Tom Van Buskirk, certainly do their share of jumping around, never letting their listener get too close to an idea or a groove for very long… a curiously sly concoction of found sounds and nautically dizzying loops and breaks that reference everything from beach-psych to diet-dub, all outfitted with delightfully strange ticks, grumbles, and seagull squawks.” – Pitchfork
MAUS HAUS 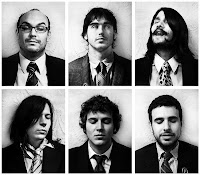 “Leave it to the weirdo mecca of San Francisco to produce a smart psych rock band in Maus Haus that practices the biggest rock perversion of them all - complete lack of guitars. Hailing from the Bay Area, Maus Haus combine a paranoid insomniac vibe with playful pop lines and cleverly cinematic lyrics that make them out to be the bastard child of Kraftwerk hanging with Captain Beefheart that would obviously have a video starring Simon Le Bon and the boys. That is an admittedly nutso sentence, but it's hard to pinpoint exactly what Maus Haus is - other than totally rad.” – RCRD LBL
Posted by The Fold at 2:45 PM